I really enjoyed this book! Also what a brilliant time to release it!! It will make a perfect summer read while you watch tennis on the tv!!
To the book…….
So the overall plot is fairly predictable, but its the details that make this book so enjoyable. Parts of this book make you want to slap the characters because WTF were they thinking!! But as we all know, mistakes are part of growing up, and there are some pretty epic mistakes made in this book.
I know that a lot of people will hate the love triangle in this book, I know I did. But it was part of the story and it helped the characters involved to grow and move out of their comfort zones! And yes I know girl code/sister code and all that, but less face it these things happen in real life. At least there were consequences and the characters learnt from their actions.
I also just want to say that it is clear that the characters behaviour is not condoned and I believe the author did a great job, through the story, of explaining why this love triangle was included in the book.
These characters though!! I think the author has done a fantastic job creating realistic characters that aren’t always likeable.
Throughout the book we get to watch all the characters grow and mature. Harper, our MC, can come across as a brat fairly often, but a lot of 16 year old kids can be. She also makes some truly terrible decisions, but she learns from these and they help her to grow as a person.
Jacob on the other hand I despised. His attitude was frustrating and while he did get better towards the end of the book I still couldn’t bring myself to like him.
My favourite characters were Aria and Colt! Mostly Colt haha. These two faced some tough challenges. Arias were mostly due to stupid decisions made my Harper and Jacob, which I’m glad happened because seriously she deserves someone better than Jacob!!
I would love a story from Colts POV!! He goes through so much throughout the book and I think his take on things would be interesting to read.
Overall this is a fun, easy read that I highly recommend! You’ll laugh, you’ll want to punch characters in the faces and hopefully you’ll enjoy a fantastic story 😊
Thank you to Macmillan Australia for sending me a copy and allowing me to take part in this blog tour ❤️❤️

Harper Hunter doesn’t know how it came to this.
Her tennis dreams are collapsing: her coach says she doesn’t have what it takes to make it in the world of professional tennis. Her new doubles partner is moody, mysterious and angry at the world. What is he hiding?
She is in love with Jacob, but he is her sister’s boyfriend. Or, he was. Harper could never betray Aria with Jacob … could she?
As Harper’s heart and dreams pull her in different directions, she has to figure out exactly what she wants. And just how hard she’s willing to fight to get it.

Taryn lives the typical writer’s life with a supportive husband, teen children, and characters from her latest book insisting they help make dinner. Taryn has been an English Literature Honours student, a media Manager and a CEO of an internet company, but she plans to write inspiring, engaging novels until the day she can no longer type. Taryn is from a family of elite athletes, musicians and academics and is fascinated by teens that surpass the norm in their field.

Enter below for a chance to snag yourself a copy of this fantastic book!

Thank you to Macmillan for providing a giveaway copy. 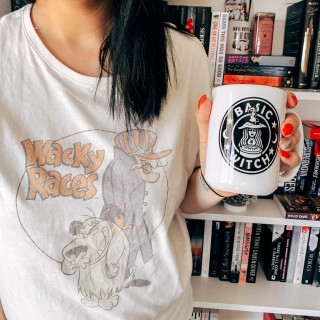